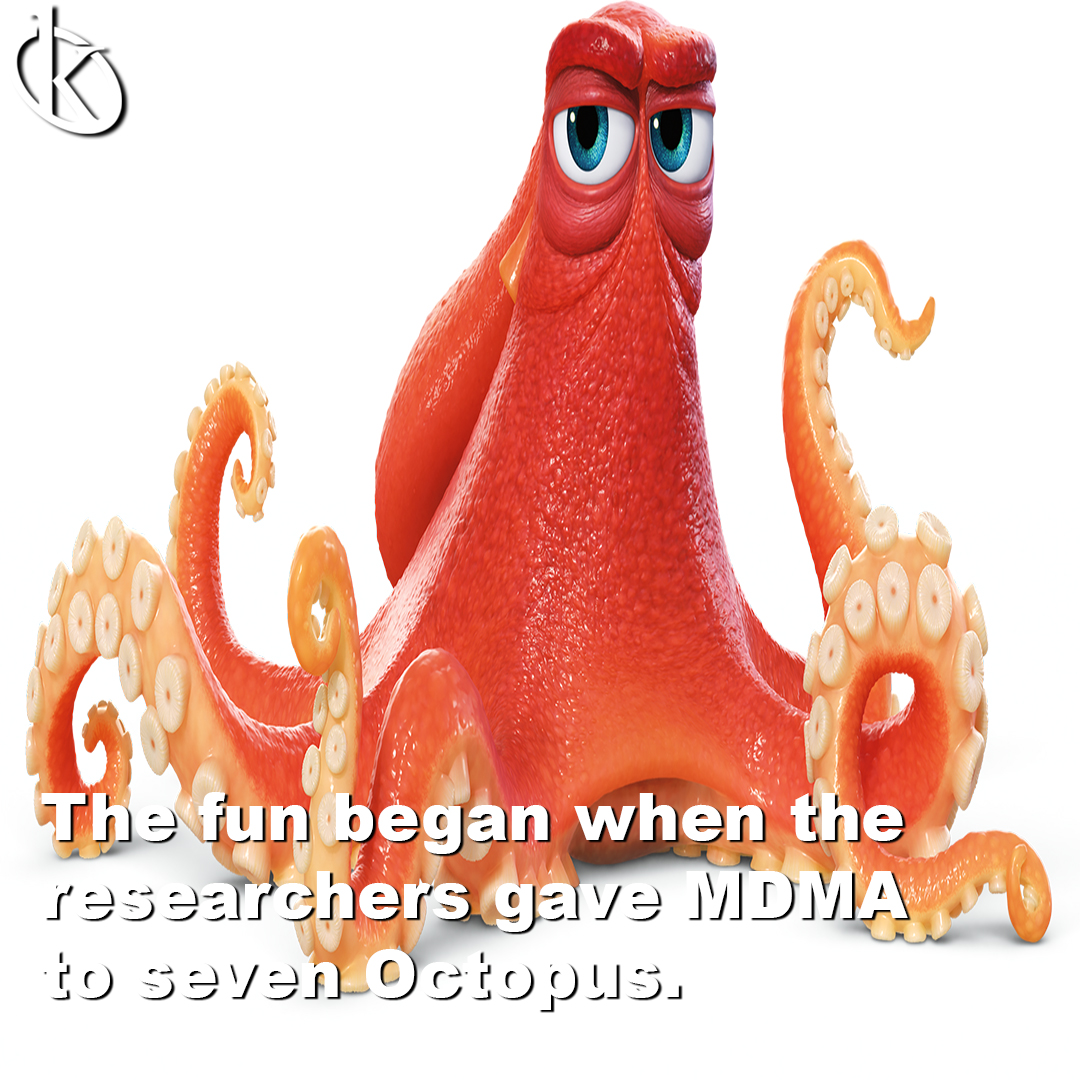 When humans take the drug MDMA, versions of which are known as molly or ecstasy, they commonly feel very happy, extraverted, and particularly interested in physical touch. A group of scientists recently wondered whether this drug might have a similar effect on other species—specifically, octopuses, which are seemingly as different from humans as an animal can be. The results of their experiment, in which seven octopuses took MDMA, were “unbelievable.”

Just think about an octopus—other than their impressive intelligence, they have little in common with humans. We’ve been heading along different branches of the evolutionary tree for 500 million years. Rather than one localized brain with a cortex, or a highly folded outer layer like our brains have, an octopus’s decentralized nervous system includes control centers for each arm in addition to a brain.

Given how different we are, Gül Dölen and her colleague Eric Edsinger wondered whether the chemistry behind human social behaviors—the system controlling the serotonin molecule—also existed in the solitary, asocial octopus. They began by analyzing the octopus genome, and found that octopuses, too, have genes that seem to code for serotonin transporters, proteins responsible for moving serotonin molecules into brain cells. Serotonin is the molecule generally considered to be responsible for feeling good. When humans take MDMA, it binds to serotonin transporter proteins and changes the way serotonin travels between brain cells, likely producing the warm and fuzzy high and perhaps the increased extraversion that the drug is known for.

The fun began when the researchers gave MDMA to seven Octopus bimaculoides octopuses inside laboratory tanks. They hoped to test whether the animals behaved more socially after receiving a dose of MDMA—a sign that the drug bound to their serotonin transporters.

After hanging out in a bath containing ecstasy, the animals moved to a chamber with three rooms to pick from: a central room, one containing a male octopus and another containing a toy. This is a setup frequently used in mice studies. Before MDMA, the octopuses avoided the male octopus. But after the MDMA bath, they spent more time with the other octopus, according to the study published in Current Biology. They also touched the other octopus in what seemed to be an exploratory, rather than aggressive, manner.

The scientists took this to mean that despite our vastly different brains, social behavior is built into the very molecules coded by our DNA, Dölen explained.

“An octopus doesn’t have a cortex, and doesn’t have a reward circuit,” Dölen, assistant professor of neuroscience at Johns Hopkins University, told Gizmodo. “And yet it’s able to respond to MDMA and produce the same effects, in an animal with a totally different brain organization. To me, that means we really need to appreciate that the business end of these things is at the level of the molecule.”

You’re probably curious: did the octopuses freak out? The scientists didn’t discuss such behavior in the paper, because it’s hard to quantify without anthropomorphizing the octopuses—Dölen warned me that the following is anecdotal evidence and not scientific observation. But yes, the octopuses acted like they took ecstasy. At first, when they received a little too much MDMA, they breathed erratically and turned white. But on lower doses, one animal “looked like it was doing water ballet,” swimming around with outstretched arms. Another spent part of the time doing flips, and another seemed especially interested in minor sounds and smells.

“This was such an incredible paper, with a completely unexpected and almost unbelievable outcome,” Judit Pungor, a postdoctoral researcher at the University of Oregon not involved in the study, told Gizmodo. “To think that an animal whose brain evolved completely independently from our own reacts behaviorally in the same way that we do to a drug is absolutely amazing.”

There are limitations to the study, of course. Dölen pointed out that seven octopuses isn’t a large enough sample size to show differences between how males and females react to MDMA. She’d like to further test the changes in behavior, as well as what happens if they block the serotonin transmitter before giving the MDMA. Such a test would convince Dölen that she was really seeing the affects of MDMA on serotonin transporters. Pungor also wanted to test whether the drug would have different effects on octopuses of varying ages, or whether an octopus’s upbringing changed its sociality.

It’s clear that psychoactive drugs like MDMA, LSD, and magic mushrooms are going through a scientific renaissance—they’re being studied as potential treatments for depression and PTSD—and as their stigma decreases, scientists are more open to studying them, and more research funding becomes available. This could be important for our understanding of animal and human brains.